Lately, I’ve been writing lots of Python and Go, but if you know anything about me, you’d know I was once a major Node.js advocate. Recently, when I’ve had to stretch my fingers to write a quick “life hack” or number crunching script to speed up my day, I haven’t been thinking of JS, so I definitely can’t call it my go-to language anymore. That said, since I once did, I believe I have the right to criticize it … so, let’s get started.

Node’s standard library is as minimal as can be. While this is a great way to encourage the community to build libraries, it also makes it harder to standardize and furthermore, compose anything. 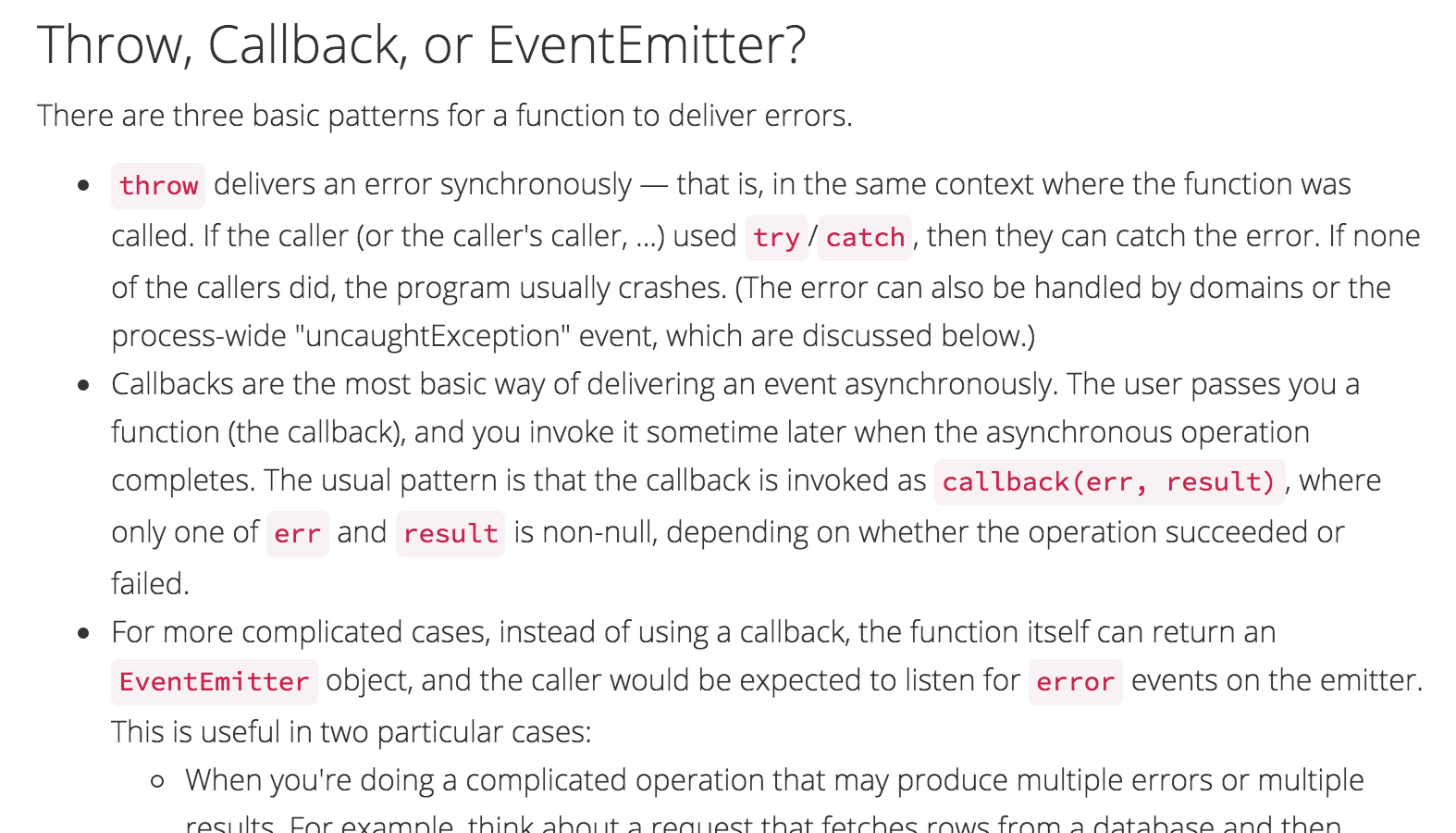 If the above snippet isn’t enough, take a peek at the following:

Exception bubbling allows errors that should be handled at call-site propagate endlessly. Catch-all error handlers are just a workaround for poor design. Seamless bubbling makes it easy to ignore your error paths, which are arguably as important as your successful paths in critical software. It’s also much harder to debug the execution path of your program when something n level deeps can change the overall direction. Of course, it’s entirely possible to be thoughtful and handle every error in JavaScript, too, but it’s cumbersome since there’s no standardization in how errors are actually handled (try/catch, .on('error'), .catch(), etc.) and moreover, it’s easy to forget.

Though async I/O is important, it’s not everything. If anything, I’d say forgetting this is Node’s biggest downside. Node forces you to think about concurrency everywhere, whereas Go, Lua, Python (though there are other problems there), and other languages allow you to incorporate it as needed without switching paradigms.

You can–and I like to believe that I have– achieved this in Node with newer constructs like generator-based coroutines and Async/Await, but they’re never first-class, and require loads of tribal knowledge in order to effectively utilize amongst all the other paradigms the community follows. If you don’t believe me, try teaching all this to a beginner from scratch.

Now, I’m not saying Node.js is an awful platform. It did a great job at popularizing a convenient interface to asynchronous I/O, and it’s still better at some things, like parsing JSON quickly. That said, now, there are superior options, like Go. When I was stuck in Node land, I’d often assess other platforms by staring at examples and laughing along, and I’ve seen a lot of (but not all!) fellow JavaScript developers do the same, but, by stepping out of my comfort zone, I’ve learned that it’s impossible to effectively criticize something without developing a strong relationship with it, which for languages, includes debugging, working around abnormalities, and learning ins and outs. All platforms have their trade-offs, and analyzing them is the only way to make educated decisions on what to leave in or out of the next big thing™.